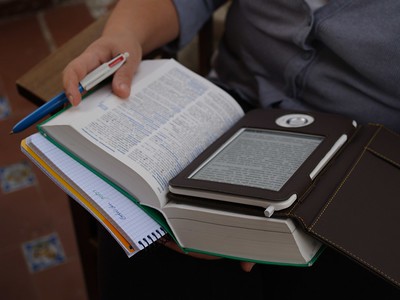 The following citation is for a chapter within an electronic book.

This table shows how the elements of this citation look within the MLA formula template.

**Note the use of two containers. The source is the book chapter. The first container is the larger source (the book title), and the second container is the database in which this book was accessed digitally (database name).

Your citation may include any of the following sections: Author. Title of Source. Title of Container, Other contributors, Version, Number, Publisher, Publication date, Location. Access date.

The citations in this box are for print books; however, if you are citing an electronic book, you would simply add another "container" by listing the database or website where you accessed the book online (as shown in the example in the box below).

Rosellini, Gayle, and Mark Worden. Of Course You're Angry: A Guide to Dealing with the Emotions of Substance Abuse. 2nd ed.,Center City, Hazelden, 1997.

Books by three or more authors:

*When there are more three or more editors, list the first author (last, first) followed by et al. As shown in the previous example.

Children's Express. Voices from the Future: Our Children Tell Us about Violence in America. New York, Crown Publishers, 1993.

Note that the original publication date of the work is optional, so the citation above could omit the "1961" date and also be cited as:

For more examples of citations from various kinds of books, see the link below:

Include as much of the following as possible:
Author. Title of Source. Title of Container, Contributors, Version, Number, Publisher, Publication Date, Location. Date Accessed.