Beyond .orgs and .edus: Finding Reliable Websites in 2018: Home

Information and activities accompanying the Beyond .orgs and .edus: Finding reliable websites in 2018 workshop in Holman Library, 2/15/2018.

Once, students were told that websites using .org, .edu, and .gov domains were more reliable (and acceptable for use in assignments) than .coms.

That was before MartinLutherKing.org (which has been owned and operated by Stormfront, a white supremacist group, since 2001) started popping up in web searches.

The site, which often appeared as high as the fourth item in a Google search, contains inflammotory and misleading information about Dr. King -- in spite of being a .org. 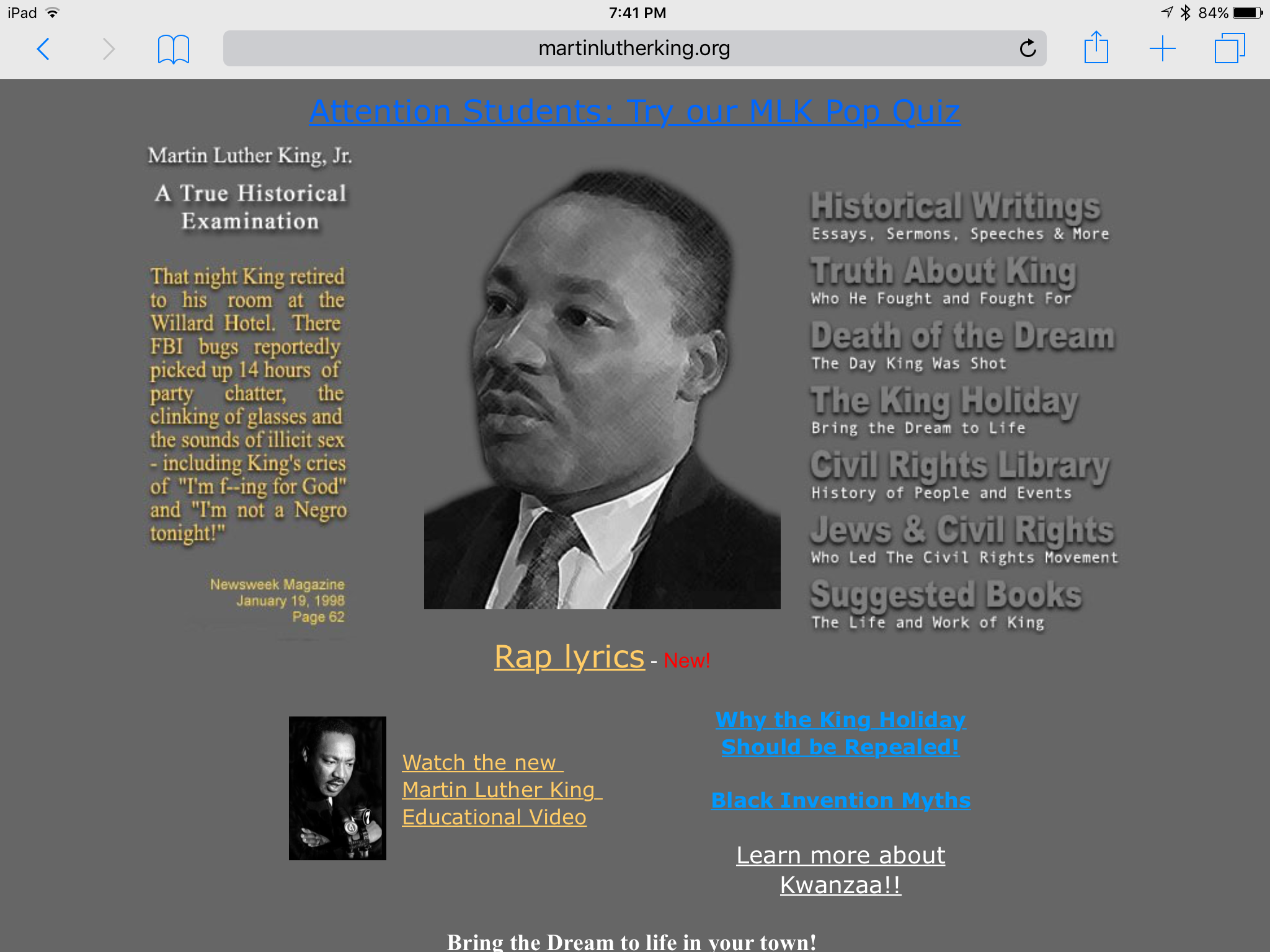 From The Daily Beast (below):

"Although the site is rudimentary, it is clearly designed to appeal to children looking for answers for assignments and book reports. Inflammatory information isn’t prominently presented on its homepage.

'Bring the Dream to life in your town!' the front page reads. 'Download flyers to pass out at your school.'

Those flyers refer to King as a 'communist,' 'woman beater' and 'sexual deviant,' and say that it is 'time for White Americans to repeal the King holiday.'"

Some sites post plenty of impressive-looking credentials on their about pages, but still don't tell you the whole story. To get a better sense of this, evaluate the websites below. Then do some outside research to determine any biases that might influence the information they provide.

Spend a few minutes exploring DHMO.org (linked below). Based on your lesson, do you consider this information reliable? Why or why not? Be prepared to discuss your observations.

WAIT until directed to answer each question. Evaluate the website or article in the text of the question. Then use the link below to answer it.

Click the link below and study the image. Then click on one or two parts of the photo that indicate this might not be a good source, or an item you would evaluate before deciding. Be prepared to discuss your response.

Spend some time evaluating HealthyChildren.org. Who is responsible for the information on this site? Answer using the link below.

Examine the article "The Washington Hall." Who is its author? Answer using the link below.

Where does the information on SELF Nutrition Data come from? Answer using the link below.

Click the link to the Skydiving Fatalities Website. Would you use this data in your paper? Be prepared to say why or why not. Answer using the link below.

Evaluate the Food Babe website. Would you use this site in a school paper about food and nutrition? Answer using the link below.

Do a Google News search for "Vani Hari" and look through the first two pages of results. In one or two sentences, describe your results and what they say about Vani Hari. Answer using the link below.